How to break a plateau 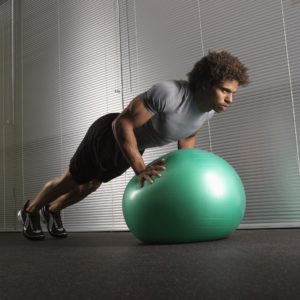 Doing the same exercise over and over again without modifying the load, intensity, or time parameters leads to clients no longer achieving gains from that exercise. To break this plateau, increase the difficulty of the exercise by adding load, decreasing the time limit, or even varying the exercise to change the angle at which the muscles are worked.

For example, if you are becoming too efficient at doing the basic push-up, introduce some instability with a Swiss Ball (as shown in picture), or consider modifying the angle such that your toes are on an incline. This creates a greater challenge for your pectoral and core muscles because of the extra forces placed on your upper body and it also activates the upper pectoral muscles which the standard push-up does not engage as potently.

The Fitness File is Body & Soul’s monthly community newsletter. Filled with health, exercise and nutrition tips, as well as the latest events, special offers and news from Body & Soul, you don’t want to miss an issue!

You have Successfully Subscribed!